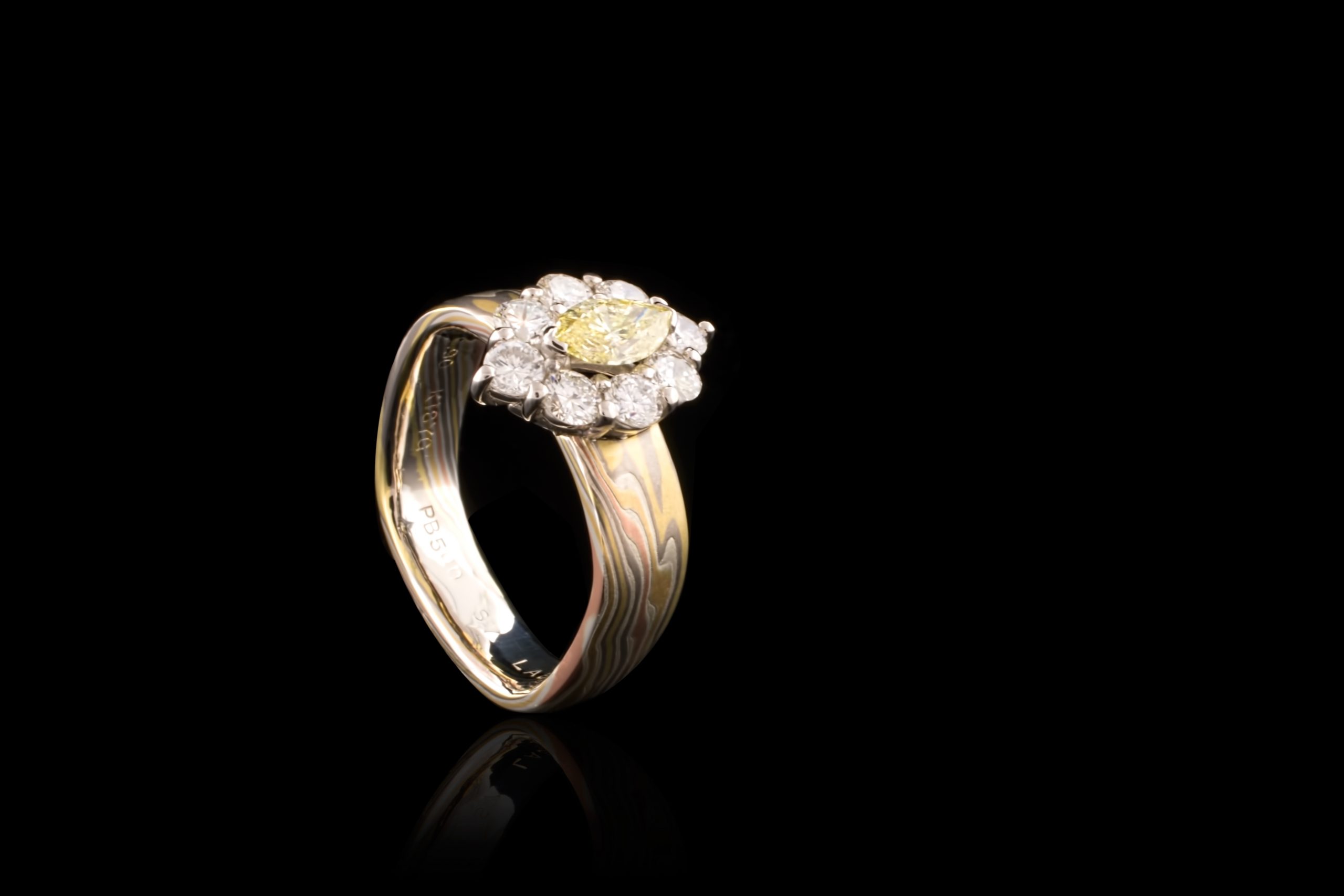 Choosing the perfect engagement ring is a monumental task. While a simple solitaire will never go out of style – and has always been the most popular choice for a diamond engagement ring – the gorgeous and remarkable trends that have glimmered over the last century may be great points of inspiration. For the magpies among us, we’ve compiled ten decades of the history of engagement rings fashion that continue to symbolize the love shared between happy couples.

Bored with the simple stylings of the Victorian era, engagement rings of the 1910s were heavily influenced by King Edward’s carefree lifestyle. After decades of the austere Queen Victoria, the Edwardian period fast became famous for its for optimism and affluence.

Beautiful jewelry has always been an indicator of wealth and status, but in the 1910s, the upper class flaunted their wealth through flashy, intricate engagement rings. Rather than heavier styles coveted by Victorians, Edwardian jewelry looked almost ethereally light with platinum filigree settings, pearls, and diamonds. Larger stones were the most desirable – owing to their sparkle in the newfangled electric light – set in intricate and sturdy 6- or 8-pronged settings.

The 1920s were distinguished by daring geometric patterns in Art Deco architecture which shirked elaborate Neoclassicism and ornamental Beaux-Arts. It didn’t take long for Art Deco to catch on throughout the world, especially in jewelry styling.

Platinum and white gold engagement rings forged into delicate filigree settings were all the rage during the Roaring Twenties. These settings typically contained geometric and symmetrical side stones, giving more focus to the whole piece, rather than a central stone. Old European and Caliber-cut gemstones like diamonds, sapphires, and onyx were most often used to develop the Art Deco engagement ring aesthetic.

The Great Depression had an enormous influence on the engagement ring market, and unless you were from the few elite American families, designs became far more restrained. With Art Deco styles in platinum and white gold remaining desirable, multiple-stone settings shifted towards single-stone settings. Due to the Depression, gemstones became smaller, and the 4-prong setting (“picture frame corners”) became the preferred way to showcase the brilliance of smaller stones.

The jewelry of the 1940s moved away from the symmetrical and toward the feminine. The Second World War’s rationing had limited metals and gemstones, which in turn affected engagement ring designs. Yellow and rose gold alloys were favored for their affordability. Instead of the opulent patterns of the previous two decades, solitaire engagement rings became the popular choice for a war-torn nation. The 1947 De Beers “A Diamond Is Forever” campaign – along with the company’s success in African diamond mines – solidified white diamond engagement rings’ reputation as the ‘only’ choice for brides-to-be.

In post-war America, “a girl’s best friend” was de rigueur. With the economy better than ever, diamonds became larger, and their shapes started to change to suit their wearer. Pear, baguette and marquise diamond engagement rings were set into solid gold bands that showcased the diamond: the true star of the show.

Another jewelry trend that took off was the stackable, unique engagement ring setting which interlocked with a respective wedding band. Many rings from the 1950s also included engravings or braid detailing, a unique characteristic not often seen outside of the decade.

In terms of jewelry design, the Sixties became the “more is more” decade. While the three-stone engagement band became the fastest-growing choice for brides-to-be, First Lady Jackie Kennedy and stars like Elizabeth Taylor turned the jewelry establishment on its head.

With Jackie Kennedy, her 1950s Van Cleefs & Arpels Art Deco-inspired emerald and diamond ring was famously refitted in 1963 into a more modern setting. Not surprisingly, diamond and emerald engagement rings became some of the top sellers of the decade. Taylor received a staggering 33-carat solitaire ring from Richard Burton, which had a lasting effect on the Hollywood elite’s obsession for ‘bigger and better.’ In fact, Taylor’s impact for enormous solitaire engagement rings has extended to present day celebrities!

The 1970s invented – or at least perfected – the simple yet stylish radiant cut emerald and princess cut diamonds. Squared shapes became popular options, especially with linear baguettes set in a deep channel. Engagement and wedding rings were often designed together as matching sets, with gold still being the top choice of the happy couple.

There’s no question that sapphire engagement rings had their heyday in the 1980s, thanks to Princess Diana’s oval-cut beauty (now worn by Duchess Kate). The Wedding of the Century set the course for floral-inspired design with a colored stone surrounded by small diamonds. This was, absolutely, the top-selling engagement ring for fiancées in the 80s.

Platinum and white gold settings remained the metal of choice at the turn of the 21st century. Solitaire and three-stone rings – with either round or princess-cut white diamonds – outsold all other engagement rings for her. The three-stone setting is now understood to symbolize a couple’s past, present, and future.

Truly, we live in a decade without any primary jewelry trend, owing to the endless options available on the internet. Many future brides desire a vintage piece for its artfully-crafted aesthetic, while others prefer something more eye-catching and modern, like a mokume gane engagement ring.

Throughout the history of engagement rings, little thought has been paid to the source of jewelry materials. However, sustainable diamonds and fairtrade gold have never been more important to the modern bride. If your fiancée-to-be is conscious of the environment and human rights, it’s wise to choose an ethical jewelry company.

Sustainable diamonds and fairtrade gold have never been more important to the modern bride. Click To Tweet

At Jaume Labro, we work with each of our clients to choose the ring of her dreams. Whether you design your own engagement ring or purchase a ready-made one, her ring will be cherished for a lifetime. To take the next step in your relationship, get started today!